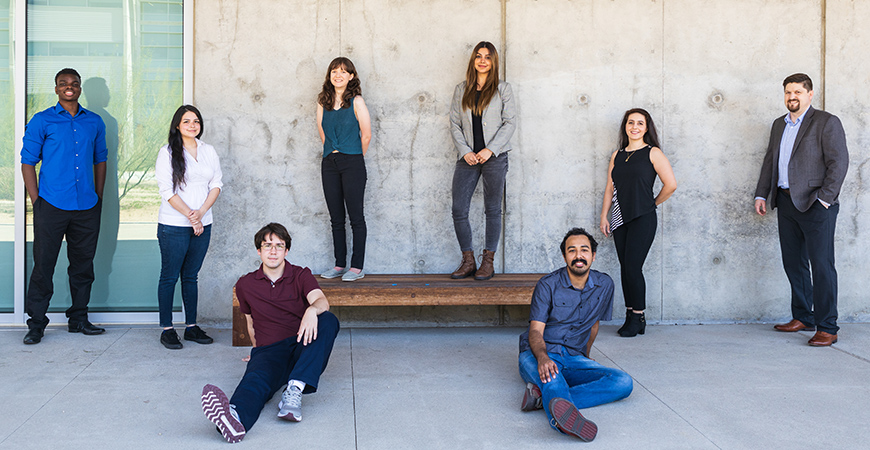 Professor Joel Spencer (far right) and members of his lab at UC Merced.

Some scientific discoveries are a happy accident (think: penicillin). Others have been there all along, they just take a keen eye to notice, which was recently the case in Professor Joel Spencer’s lab.

An observation Spencer made during his postdoctoral appointment at Harvard University laid the groundwork for his most recent publication in PLoS ONE titled “Intravital Fluorescence Microscopy with Negative Contrast.”

Spencer is an expert in live imaging, a technique that allows scientists to monitor the function of cells and organs in live mice to gain a better understanding of human functions. Live imaging is a quick, precise process that involves labeling a specific tissue structure (e.g., cells or blood vessels) in a live mouse with a fluorescent dye or molecule to observe the function of those structures in organs and tissue such as bone marrow. This creates positive contrast, or highlights what Spencer is studying amid the cells around it.

Spencer used live imaging to study blood vessels in the bone marrow by injecting a fluorescent sugar molecule into the blood which highlight the blood vessels. When conducting this work, Spencer caught onto a less obvious side-effect of this process.

“Once in the bone marrow, the fluorescent dye happened to leak out of the blood vessels where it would then accumulate around the cells in the marrow, so what you end up getting is a bunch of dark circles with a bright background or negative contrast,” Spencer explained. 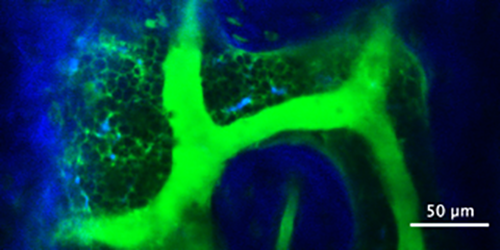 This negative contrast turned out to provide added benefits to live imaging, inadvertently revealing things like cell streaks in the blood flow and cells moving in the marrow. This in turn let Spencer measure things like blood velocity and blood vessel permeability, and also identify and track all the cells within the marrow space. Negative contrast isn’t a new concept, but Spencer, his graduate student Christian Burns and colleagues from Dr. Charles Lin’s lab at Harvard University are the first to use it in this way in the bone marrow and lymph nodes and publish the subsequent findings in a peer-reviewed journal.

“While I was aware of the fact that negative contrast fluorescent imaging had been demonstrated as a method for visualizing cells without a direct fluorescent label, I was surprised by the amount of data points which are generated in comparison with traditional fluorescent labelling techniques,” said Burns, who joined Spencer’s lab in early 2017. He helped generate negative contrast images of bone marrow and helped to adapt a previously published program capable of calculating blood flow velocity from the dark cell streaks in the blood.

“During a single negative contrast imaging session, it is possible to determine blood vessel leakage and permeability; blood flow velocity; and cell motility, volume and density — all while reducing photobleaching and cell toxicity in the imaged tissue when compared with traditional labelling methods,” Burns said. “Several datapoints can be collected in a single imaging session, while utilizing common fluorescent labels and requiring no additional microscope components.”

Negative contrast imaging is particularly advantageous for imaging labs because it’s a technique that can be easily incorporated into current live imaging microscopes. Live imaging, by nature, requires scientists to work with mice (or other model organisms) because they are accessing a living, natural site. It’s a delicate technique and scientists must work quickly to minimize the impact on the live animal and be ready to troubleshoot problems.

“This technique is handy because it doesn’t require significant prep time and if you have an extra imaging channel, you can get this data on the fly,” Spencer said. “Being able to make that sort of decision and have that sort of flexibility with this technique I think is very important.”