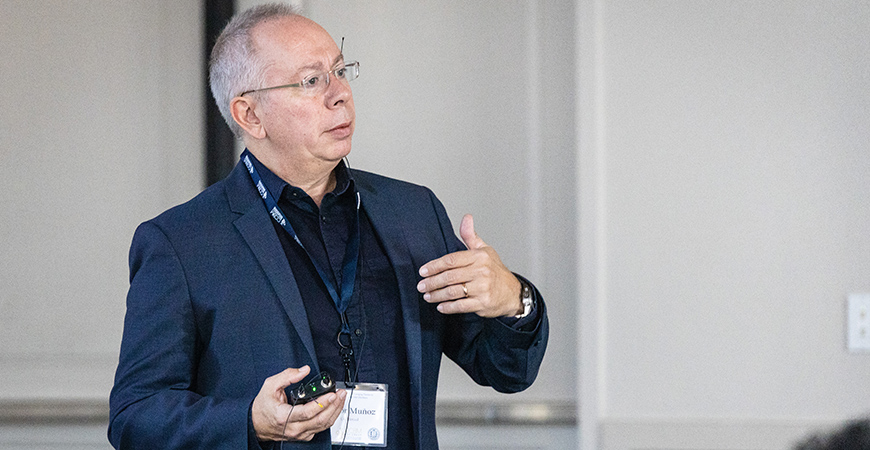 Proteins operate like biological machines, regulating nearly every major function and organ in our bodies through a still-mysterious shape-shifting process. Bioengineering graduate group chair Professor Victor Muñoz has a new $1,082,356 award from the National Science Foundation to unlock those mysteries.

Proteins are complex molecules required for the body’s healthy functioning, including the regulation of tissue and organs. Muñoz, whose research focuses on their unique properties, calls them “biological nanomachines” because they perform most of the cellular functions in living systems through their abilities to assemble on their own into necessary structures and change shape on cue.

“In this project we aim to decipher the blueprints that allow proteins to operate as nanomachines,” Muñoz said. “Learning how to read these blueprints will enable the next revolution in biotechnology and biomedicine and the keys to that process are in the rates at which proteins fold and unfold.”

Proteins have been studied for more than 50 years, but there is still no unified rate theory that explains how they fold and unfold. Muñoz has worked in the field for the past 25 years and pioneered multiple discoveries thus far but says identifying and advancing a new paradigm can take time because the field is so interdisciplinary, spanning biology, biochemistry, physics, computer science and engineering.

“We have been one of the few groups that can interlace through all these disciplines, and getting this grant is a testament to that ability and effort,” Muñoz said.

Muñoz strives to identify a unified rate theory that explains the folding, bridges existing gaps in connecting theory, computer simulations and experiments; rationalizes the rate patterns observed in conventional experiments; and is useful for single-molecule experiments. Muñoz’s goal is to experiment with dissecting the rates of proteins folding with an approach to track how each molecule changes shape along its transition path, which would help examine for the first time the key aspects of the process.

“Our approach combines state-of-the-art single-molecule fluorescence experiments and analytical methods that we have developed and no other lab in the world is using yet,” Muñoz said. “We expect that our results will directly test protein folding rate theory, connect with molecular simulations and promote a paradigm shift in how experimental rates are interpreted.”

Muñoz, who also serves as co-director of the NSF-funded CREST Center for Cellular and Biomolecular Machines (CCBM), is currently in the process of recruiting a postdoctoral researcher for the study, purchasing equipment and moving labs on campus. The project is anticipated to launch on July 1.